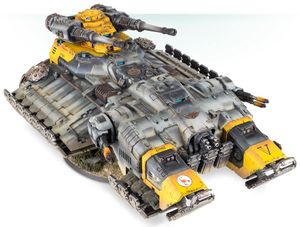 The Astraeus Super-heavy Tank is a newly unleashed Super-heavy grav-tank used by the Primaris Space Marines. It is a devastating war machine that represents the pinnacle of Imperial engineering.[1]

Unusually, the design does not originate directly from the work of Archmagos Dominus Cawl’s Repulsor transports designs, but instead blends his innovations with STC technology supposedly recovered by the Minotaurs Chapter during the so-called Perun Cross Incident, a battle whose records are sealed to all but the higher echelons of the Inquisition. As such, production of these vehicles is focused among the more distant Forge Worlds, primarily the fortress-forge of Mezoa, where the gaze of Mars cannot so easily pry.[2]

The Astraeus has an enormous hull that mounts a devastating range of defensive and offensive systems. Its main weapons are a pair of Macro-Accelerator Cannons, which are coupled with sponson-mounted Las-Rippers or Plasma Eradicators, turret-mounted Heavy Stubber, and twin-linked Heavy Bolters or Lascannons mounted on the front of the vehicle. It is protected by layered void shields and is held aloft by powerful anti-gravitic generators, which are powerful deterrents to enemy assault units. Unlike the Repulsor, the Astraeus does not have any transport capacity – instead, this colossal machine is dedicated to destruction alone. While there are few targets that can stand up to one of the Astraeus Super-heavy Tank's furious fusillades, it particularly excels at shooting down aircraft.[1]

'Astraeus' was a titan in Ancient Greek mythology who was husband of Aurora (who was another titan). He was also called father of the winds. It is said as 'Astraei fratres' in Latin.