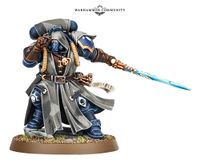 Librarians chosen for Vanguard service have mastered unique battle-disciplines that focus on obscuring the passage of their comrades and wrong-footing the opponent with illusions and hallucinations. Shaping psychic energy about themselves like a cloak of shadow, these psykers guide their battle-brothers through enemy territory to their destination without raising so much as a flicker of suspicion from watchful foes. They are cowled in hooded camo cloaks to keep their identity – and the formidable psychic potential at their disposal – concealed.[2]