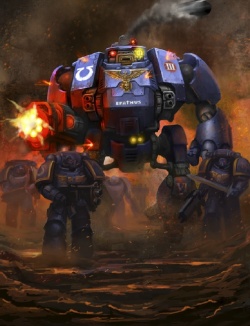 The Redemptor Dreadnought is a newly created variation of the Space Marine Dreadnought and is designed to allow maimed Primaris Space Marines to continue to fight the Imperium's many enemies.[1]

Taller, broader and more cleverly wrought than the traditional Dreadnought design, these goliaths are powered by hyper-dense reactors and sophisticated fibre bundles. Such is the miraculous design of the Redemptor’s neural links that its inhabitant, despite being entombed in the sarcophagus within the Dreadnought’s chest, can exercise control with surprising dexterity and speed.[3]

It is whispered that the advanced systems of the Redemptor are a curse as well as a blessing. The Mechanicum Tech-Priests that first built these walking machines of destruction spared little thought to the health of the incumbent, seeing him as little more than another part to be interred or replaced as necessary. Many of those Redemptors that have fought for a sustained period have already had their sarcophagi replaced, their original pilots burned out by the intensity of the machine’s destructive prowess.[4] Sometimes though the Dreadnoughts surging energies leech the occupant’s life force until he is reduced to nothing but a sac of blackened organs, fit only to be reinterred, this time in a true mausoleum dedicated to his selfless sacrifice.[5]

Redemptor Dreadnoughts wield an array of devastating weaponry including a Onslaught Heavy Gatling Cannon or Macro Plasma Incinerator on its right arm and a Redemptor Fist with Heavy Flamer or Onslaught Gatling Cannon on its left. It is also equipped with 2 chest-mounted Fragstorm grenade launchers or storm bolters and a carapace-mounted Icarus Rocket Pod for air defense.[3]