Spear of Macragge is a novella by Nick Kyme in the Space Marine Battles novel series, released in September 2013.

With Captain Sicarius laid low and defeat looming, the Ultramarines rally behind Chief Librarian Tigurius to try and save the world of Damnos from the necrons. As the legendary tank commander Antaro Chronus engages the necrons in a massed armour battle on the plains of the deadly world, Tigurius and his followers make a desperate attempt to win the war once and for all. 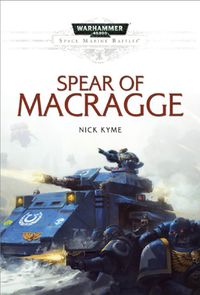