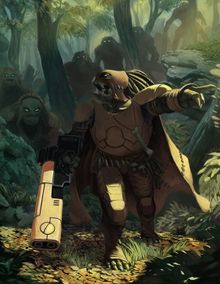 Shapers make up the leadership of the Kroot, both as individual Kindreds fighting under the Tau Empire or as mercenary forces, and oversee the consumption, direction and distribution of genetic material among the most basic Kroot and between various different Kroot forces. The Shapers are referred to as the Shaper Caste in one source, indicating a cultural link between the Tau and Kroot.[2]

The Shapers lead individual Kindreds into battle, directing them as a Sergeant would. A large kindred is typically run by a Master Shaper, while a group consisting of multiple kindreds may be headed by a Shaper Council of three to five kroot, who act as overseers to the other shapers, and ensure that shapers do not lead their warriors down a dangerous evolutionary path. Occasionally a Shaper Chief may rise to power in times of emergency and unite hundreds of kindreds as a single army.[2][3]

The other job of a shaper is to direct the evolution of the Kroot in their Kindred by consuming certain enemies. For example, if a Shaper wanted his Kindred to become more muscular, he would have them pursue Orks; likewise a Shaper who wanted more agile or swift Kroot would direct the Kindred to hunt Eldar. The Imperium has designated them Primary Intermediate Trophic.[3]

The Shaper as many powers and traits among them are an instinctual understanding of the foes wounds and abilities, if he has devoured an example of the foe's race.[2]

They also have shamanistic powers, due to them being the focus of Kroot ancestor worship of their Kindred, practising rituals that seem to fill them supernatural powers, usually involving a sonorous chant and access to the powders, rocks and bones kept within the Shaper’s fetish pouch. Among these powers are Ancestral Blessing, calling the warrior spirits of his ancestors to aid the Shaper and his allies, Blood of the Stalker, daubing himself and his allies skin with the blood of a local predator and with a prayer to gain favour of the ancestors and grant helping them with hunts, and Prophetic Dream, visions from their ancestors that grant him foreknowledge of the future that is often difficult to understand, vision which may relate to something in the next week or even years.[2]