Symbol of the Genetor Order 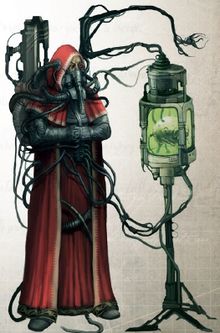 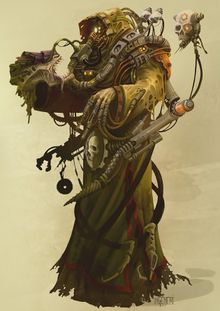 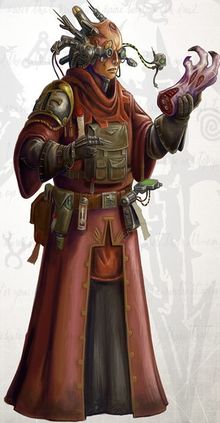 Genetors are one of the Holy Orders[15] that make up the Ruling Priesthood of the Adeptus Mechanicus, specializing in genetics.[3] They are very common among the Mechanicus and often accompany Imperial forces involved in the exploration of new worlds.[1] They are dedicated to the study of biology and organic anatomy and are heavily represented among the Mechanicus, possibly due to the Mechanicum’s experiences with mutants on Mars during the Age of Strife.[5a] Some sources[3] state that the term 'Genetor' is synonymous with the Magos Biologis (sometimes Divisionis Biologis[11] or Divisio Biologis[12]), while some place 'Magos Biologis' as a title within the wider Genetor Order[15], or within the Magi Order.[5a]

The Order commonly studies biological systems; those of the xenos in order to defeat them, those of the human in order to improve them. It is one of the few institutions in the Imperium, alongside the Inquisition's Ordo Xenos, permitted to study xenos and regularly examine alien species. They have established covert research facilities such as the Anphelion Base in conjunction with the Ordo Xenos to study the Tyranid race, taking any opportunity to capture and study the creatures in order to devise a way to counter their organic weaponry and super-adaptability.[1] Members frequently accompany exploration fleets, sometimes even forming their own Genetor explorator teams,[19] to test the populations of rediscovered worlds for mutation outside of the prescribed norms.[5a]

The Magos Biologis have been involved in the creation of many of the Imperium's genetically modified entities used by different branches. It was an Adaptus Mechanicus geno-lab that was used to develop the Cursed Founding on Incunabla, possibly in conjunction with the Thorian faction of the Inquisition.[20] Some examples of the Order's creations are:

Several specialisms and titles are used within the Order:

Members of the Order engage in the Quest for Knowledge as other Tech Priests, though differ in that they regard flesh not as inferior to metal, but instead as a different type of machine.[3]

Like other dogmas, different philosophies interpret this ideology differently. Notable factions are: