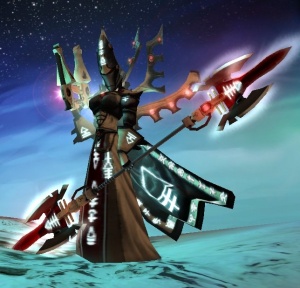 Farseer Taldeer near the end of the Dark Crusade.

Taldeer, also known as "Taldeer the Dreamer", was a Farseer from the Craftworld Ulthwé, later a Wraithknight.

Taldeer was sent to Lorn V after it was learned that it was a Necron Tomb World. With a small number in stasis below its surface soon awaken. Taldeer and her forces allied themselves with a force of Imperial Guard's 412th Cadian Regiment, lead by general Sturnn, when it they discovered that Orkz and the forces of Chaos were also upon the planet. At first assisting in secret by destroying critical Chaos and Ork emplacements, Taldeer later promised to assist General Sturnn reach an ancient Imperial Titan, Dominatus that the humans had come to retrieve. Not trusting the humans, the Eldar allowed a powerful gate to close behind them, trapping the humans with the combined forces of the Orkz and Chaos. This allowed the Eldar to reach the Titan first. Taldeer attempted to use an aspect stone to destroy several Necron monolithes, but the stone proved incapable of defeating them. In desperation, she again managed to convince General Sturnn to assist her. Using the Titan to provide additional fire, the Imperial Guard and Eldar managed to defeat the Orkz, Chaos, and Necrons decisively. The strain of using its weapons, as well as powering the aspect stone, proved too much for the derelict Titan's power core, which overloaded. The explosion killed many of the Imperial Guard forces, while Taldeer ordered her troops to gun down the survivors, before Taldeer and her warriors vanished back into the webway. In response to this betrayl, the Imperial Guard formed a force dedicated to hunting her down across the galaxy.[1]

Sometime later, she was sent to the planet of Kronus, another Necron Tomb World. She came primarily to destroy the Necrons once again who were emerging on Kronus, however once she witnessed the full scale of the battle on Kronus between most of the Galaxy's major powers she decided to make a full conquest on the planet. The Imperial Guard tracked her to this planet, intending to bring retribution for her actions of Lorn V. The Blood Ravens chapter of the Imperium's Adeptus Astartes also landed after it was discovered important relics from the Horus Heresy were on the planet, and intended to purge the planet of all opposing forces: human, heretic, and xenos. Taldeer attempted to defend her position on the planet, but she and her warriors fell against the a siege by the Blood Ravens. Afterwards, Taldeer's soul was absorbed into a spirit stone.[2] Taldeer's spirit stone was taken by Azariah Kyras, librarian of the Blood Ravens, and kept as a trophy of the battle. Kyras was then hunted down and defeated by Taldeer's twin brother: Ronahn. Ronahn reclaimed his sister's spirit stone and returned her to Ulthwé.[3]

Taldeer's spirit stone was stored within the sanctum of Autarch Kyre, who had learned of a prophecy involving the Spear of Khaine, fortold by Taldeer. During the search for the speak on Acheron, it was discovered the prophecy was incomplete and thus should not be followed. In order to accomplish this, Farseer Macha and Ronahn staged a heist of the sanctum in order to recover Taldeer's spirit stone. After recovering the spirit stone, it was placed within a Wraithknight, as being a twin made Taldeer's soul able to power/partially control the wraith-construct. In her new form, and piloted by her brother, Taldeer fought alongside Farseer Macha on the wandering planet Acheron, aiding the Farseer in her attempt reach the Spear of Khaine.[5]