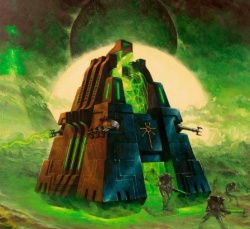 The Necron Monolith is a fearsome heavy support unit, and a key part of the immense arsenal of ancient technology used by the Necrons.

A Monolith is a monumental vehicle, constructed from the same living metal as all other Necron vehicles. It fulfills the roles of transport craft, armoured destroyer and Necron power icon, sowing terror and destruction as it ponderously moves across the battlefield. The large crystal at its centre pulses with a sickly green light when it uses its Power Matrix to activate either its primary weapon system, the Particle Whip, or the dark portal in its frontal section to transport other Necron units.[3] Necron Monoliths are heavily armoured and, thanks to its outer layer of living metal, are capable of self-repairing almost any damage sustained on the battlefield. The only true way to halt the advance of a Monolith is a sustained volley of heavy firepower to create a breach in its armoured shell to expose the vulnerable vital systems and crew.[4]

The first wave of a Necron assault often consists of Monoliths being teleported to a planet's surface to act as a bridgehead for invading forces, who deploy through the Monoliths' portals.[3] 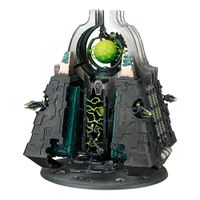 Each Monolith is equipped with four Gauss Flux Arc Projectors, which allow it to damage every nearby unit with coruscating arcs of sickly green lightning. The Gauss Flux Arc can be replaced with a Death Ray.[7] In addition to this Gauss Flux Arc, if the Monolith has not recently deployed its portal it can discharge the Matrix's energy in the form of a Particle Whip.[3]

A Monolith’s portal is a dimensional corridor between the battlefield and a tomb world, allowing legions of Necron warriors to cross vast distances and enter the fray with a single step.[5]

A Monolith Phalanx is a formation of between two to five Monoliths that join a battle as a single group, teleporting into place after the initial engagement has begun.[1] This particular formation, at certain places in the four-dimensional universe, can emit a frequency waveform with the effect of distorting space-time to create a powerful energy field known as a nodal grid, within which Necron units are all but impossible to destroy.[1]

If two Monoliths are part of the same Phalanx, and are within a certain distance of each other, a Nightshroud is projected between the two. Psychic powers cannot be targeted through a Nightshroud, and all shooting attacks (whether projectile or energy), save those from Gauss weaponry that pass through the Nightshroud have their strength reduced.[1] 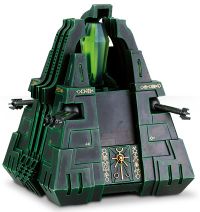