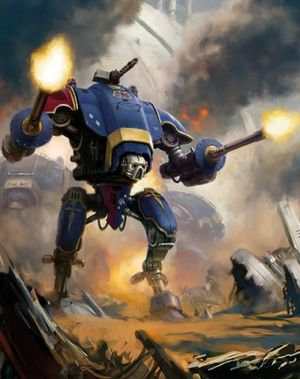 The Knight Helverin is a type of smaller Armiger-class Imperial Knight.

The Armiger Helverin is a fast-moving weapons platform designed to lay down blistering hails of heavy fire while running rings around the enemy’s forces. In place of the close-ranged armaments of the Knight Warglaive, Helverins are equipped with a pair of Helverin Autocannons which can lay down hundreds of shells per minute. This lets the Knight Helverin widdle down infantry ranks or shred lightly armored vehicles. With Helverins mounting two of these formidable weapons each, and hunting in packs up to three Knights strong, their withering bararges can rapidly break an army’s flank or blunt the foe’s assault well before it can hit home. Helverins also mount carapace weaponry in the same fashion as Warglaives. Many favor heavy stubbers in this role, while others choose Meltaguns.[3]

For many Armiger pilots, the mental imperatives transmitted through their neural bonds can feel unnatural and invasive. It is common for new pilots to feel a sense of resentment or upset at having their desires and opinions directed remotely, while those without the requisite mental fortitude may even lose their grip on their sense of self. More than one Freeblade has been born from such feelings, the Armiger pilot rebelling and fleeing rather than enduring the mental dominance of another. It is for this reason that many Armiger pilots train at the side of a Knight Preceptor before assuming their duties alongside their bond-liege. The dutiful and heroic example set by the Knights Preceptor inspires Armiger pilots to accept their subservience to such obvious champions of the Imperium, and also plants within their minds a firm aspiration to do their duty and to live up to the example set for them.[3]

Even as the Knights Preceptor are conditioning the Armiger pilots, they are also busy assessing their abilities. Most Bondsmen begin piloting from the helm of a Warglaive, for its weapons and role are both relatively straightforward. Those who demonstrate a cool nerve and a marksman’s eye are soon recommended by the Knight Preceptor for promotion to a Helverin. Helverin packs are able to serve a number of strategic roles upon the field of battle. From laying down enfilading fire and forcing dug-in enemies from their positions, to guarding a Knight army’s flanks from aircraft and light armour, to escort or scouting missions in hostile territory, Armiger Helverins are versatile and highly destructive war engines. Small wonder that they are popular throughout both Imperial and Adeptus Mechanicus Noble houses, and relied upon heavily to support their larger compatriots at war.[3] 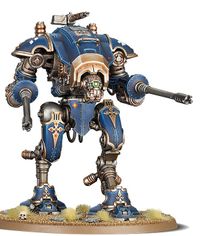