The Stromark Massacre is an audio drama by C.Z. Dunn and Andy Smillie in the Space Marine Battles novel series, scheduled for release in November 2012, as an exclusive release at Black Library's 2012 Weekender event.

The Stromark system has fallen into rebellion and the sons of Sanguinius have been sent to end the conflict and return the system to the Emperor's light. On Stromark Prime, the Flesh Tearers descend with their most feared warriors – the bloodthirsty Death Company – to tear the heart from the rebellion. But as the murderous Space Marines rampage through Stromark Prime's palace, the world's governor may hold their fates in her hands. Meanwhile on Stromark Secundus, the Angels Encarmine send down a force of veterans to despatch any remaining resistance. But how can these ancient warriors survive in a radioactive wasteland? And why have they not been deployed for more than a millennium? 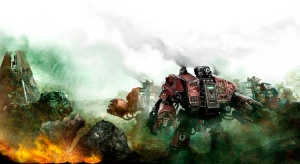