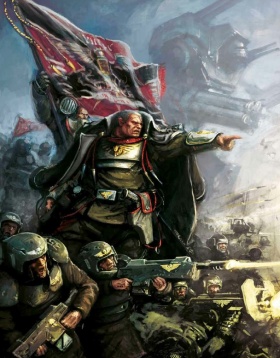 Lord Castellan Ursarkar E. Creed was a Lord General of the Astra Militarum and the leader of the Imperial forces of Cadia during the 13th Black Crusade. He was the most renowned of all Cadian Shock Troopers and has led Imperial forces through the most important battles that the Cadians have ever faced, from raids by the Eldar to the periodic Black Crusades led by the forces of Chaos.

Jarran Kell, Creed's loyal Colour Sergeant, was always found by his side and has fought through countless battles with him.

Creed was born in 959.M41[7] on Cadia. His father, formerly a Cadian Shock Trooper, had a sheiling in Kasr Gallan. When he was eight, cultists attacked Kasr Gallan and killed his father, his mother and his sister. He remained under a bed with the corpse of his sister, trying to hide himself, then a Space Marine, dressed in gleaming black power armour and swathed in cream-coloured robes that hid his face, lifted the bed and gave him a laspistol before speaking with a voice that was deep, ancient and lonely.[5]

What happened after that is unknown, but then Creed was found by Orsani Rudvald of the Cadian 8th in the ruins of the city of Kasr Gallan. In one hand was clutched that old laspistol, and in the other a tattered copy of De Gloria Macharius. To this day, Creed refuses to speak of the atrocities he witnessed, or how long he was forced to survive on his own[2]. The Cadian 8th was impressed by this boy's courage and determination and adopted him. When he was old enough, he joined the ranks. He quickly became an excellent soldier and was drafted into the Whiteshields, the elite legion for the young of Cadia. This is where he met his future Colour Sergeant Jarran Kell[2].

His time spent in the Whiteshields was one of war and death, as was expected. He was thrust into the Drussite Crusade, and by the time the Cadian forces were victorious, Creed had been promoted to Captain of the Shock Troops and Jarran Kell was made his Colour Sergeant. From this position, he often led from the front lines, earning him the respect of the men under his command. In official matters Creed was as disciplined as any Cadian officer, but he knew when to turn a blind eye, and as such is disliked by many Commissars. Creed rose quickly through the officer corps, proving to be a masterful strategist, adept at coordinating both defence and attack. He had a natural genius for commanding any unit of men, whether it was a platoon or an entire army, and his tactical genius is of a kind not seen in the Imperium for generations[2].

During the Hrud migration of 983-5.M41, Creed fought with Kell at his side throughout, and was commander of the forces that attacked and killed the Chaos Lord Brule on Treconondal. He was then promoted to Lord General of Cadia, and his first victory was over the Ulthwé Eldar raid on Aurent in 992.M41. He was now the most successful living commander of Cadia and only his lowly birth held him back from holding the highest command positions.[1]

In 996.M41[6], Creed led the Cadian 8th on Besana against the Chaos cultists of Luciver Anckor, a faction called Anckorites.[4]

In 999.M41, a murderous plot by Chaos traitors wiped out nearly the entire Cadian High Command and Officer Corps in the Battle of Tyrok Fields, a battle where Creed would take personal command of the reeling Cadian forces and achieve victory[1]. In such times of emergency, the special rank of Lord Castellan exists, to be bestowed either for life or until the crisis was over. Creed was just returning from his latest successful crusade, and was welcomed back by the majority of the rank and file of the Cadian armed forces. Gradually his potential political enemies stepped back and allowed Creed to be named Lord Castellan of all Cadia.[2]

Ultimately, Creed had to fight off Abaddon's 13th Black Crusade, the most devastating Chaos crusade yet. With Jarran Kell at his side, he managed to co-ordinate the forces surrounding Cadia to prevent the dark gods from gaining a hold in the material universe, but only at the cost of many lives and even one of the planets of the Cadian system. During the final fighting on Cadia, Kell was killed to buy time for Creed to escape from the Bringers of Despair and he linked up with various other Imperial commanders including Belisarius Cawl, Saint Celestine, Orven Highfell, Greyfax, and Marius Amalrich. In the final battle beneath the surface of Cadia, Creed and his allies sought to delay Abbadon's advance until the Pylons of Cadia could be fully activated. Avenging Kell, Creed was able to save Saint Celestine and Greyfax during their duel against Abaddon, but lost an arm in the process. As Abaddon was about to finish off his hated adversary, he was impaled from behind by Celestine.[3]

However Abaddon was ultimately able to destroy Cadia by redirecting remnants of the Blackstone Fortress Will of Eternity into its surface, destabilizing its pylons and pulling the planet into the Warp. Creed and his Cadian 8th bought time for the Imperial forces on Cadia to evacuate, holding back endless hordes of Daemons. As Cadia died around him, Creed accepted his fate but was confronted by a giant in scaled armor. The giant laughed and said that Creed's time need not to end here.[3]

Before the Fall of Cadia, Creed used two laspistols for a very long time. One of them was an old Mars-pattern model, battered, scratched and with a faded serial number stencilled in small white letters across one side; probably the same pistol he was found with in Kasr Gallan. The other was a more ornate piece, designed for an officer, with brass fittings to the handle and an aquila on the barrel.[5] 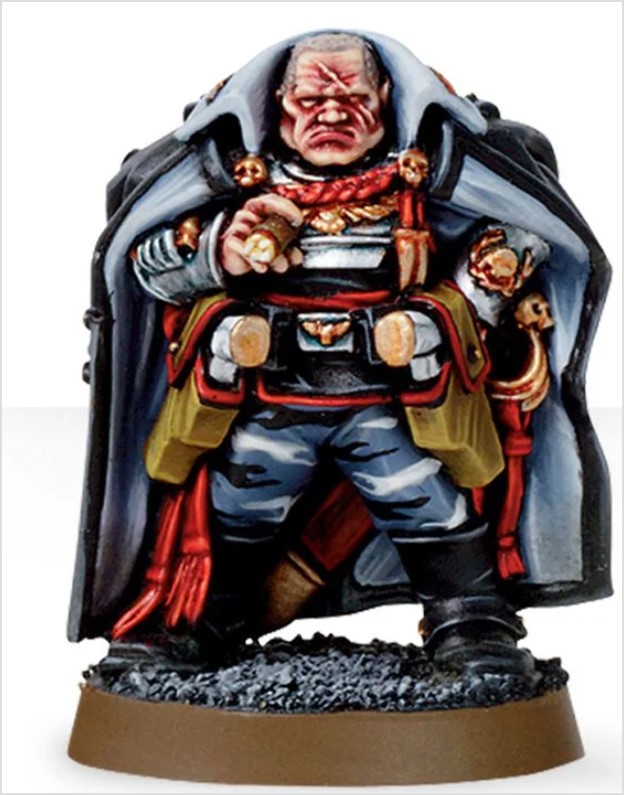