Lugganath (or Light of the Fallen Sun in the language of the Eldar) is an Eldar Craftworld. It has ties with the Harlequins, for the Lugganath Eldar hope to abandon this galaxy and start a new civilization within the webway. They are perceived as little better then Corsairs by most other Craftworlds due to their tendency to host Corsair fleets and close ties to the Harlequins.[7]

Lugganath's symbol is the Black Sun, a reference to the lost glory of the original star systems of the Eldar Empire. It is said that if a viewer were to look far enough into the void he would see the last light of those dead stars — a metaphor that the Eldar of Lugganath find fitting.[7] 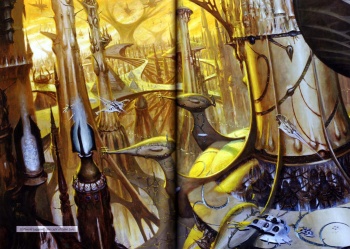 When Lugganath was ravaged by the disease known as the Brittle Coma, its Farseers looked into the realm of Nurgle in the Warp to attempt to find the captive Isha and also end the deadly plague. They knew that they would certainly die in the attempt, but believed their souls would be drawn into their Spirit Stones upon death. At first, their astrally projected forms were able to penetrate into the Garden of Nurgle, but as they gazed upon the manse of Nurgle in the distance they were beset on all sides by hordes of Plaguebearers. The battle raged for days, devastating the garden. However, in the material world, the physical forms of the Seers began to shake and convulse, succumbing to the very plague they hoped to overcome. The souls of the Seers were eventually claimed by the Immaterium, sucked into Nurgle's realm and forced to transform into wailing trees that bare Nurgling-fruit.[6]

In 421.M41, the Craftworld's inner council was massacred by Steel Fang.[8]

More recently, Lugganath Craftworld is known to have been active in the western quadrant of the Segmentum Obscurus.[2] In 801.M41, forces from Lugganath attacked the stronghold of the Steel Hearts and destroyed the Chaos Renegade Chapter in its entirety. Later, in 805.M41, forces from Lugganath aided in stymieing a Daemonic incursion on Cathox Prime and also in suppressing a Chaos Cultist uprising on Cathox Gamma.[3]

At some point, the Farseers of Lugganath predicted the rise of the Ork pirate-engineer lord Gorkog Chrometeef, prophesying that, should Chrometeef succeed in his invasion of an unnamed Imperial Industrial World, that he would become a menace to merchant shipping across three sub-sectors. This, in turn, would provoke an Imperial anti-xenos Crusade in response that would lead to the Craftworld's destruction. Marshalling its forces, along with allied Corsairs warbands led by Prince Eidear and Princess Isbeil, the eldar were able to bring down Chrometeef's new flagship, the Beastmother, and kill the greenskin before he could launch his campaign, though not without significant loss of life.[12]

Some point after the formation of the Great Rift Lugganath sent forces to War Zone Laevenir to aid their kin against the Tyranids.[13]