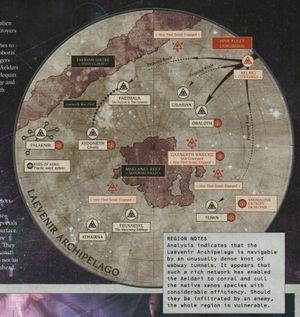 War Zone Laevenir is an ongoing conflict in the Galaxy.[1]

For thousands of years, the nine systems of the Laevenir Archipelago and its 11 Maiden Worlds remained under the careful watch of the Asuryani. However all that changed when the Tyranid Hive Fleet Ouroboris arrived.[1]

By the time Craftworld Kinshara call for aid reached their kin, the Tyranids had already consumed one of the Archipelagos systems. Such a loss was unforgivable and irreplaceable for the Eldar. However an even worse prospect was the fact that the race known as Those Who Evade the Crone dwelt within the system. The Kinshara had the unique ability to dilate time and prove difficult for even Eldar Farseers to track. Should their DNA fall into Tyranid hands, the xenos might evolve to dangerous new heights. This prompted a large Eldar warhost to respond to Kinshara's plea for aid. Gathering in the Athairna System, they consisted of Warhosts from six Craftworlds, a number of Harlequin Masques, several Corsair fleets, and even detachments of Ynnari. However cracks began to appear in the Eldar ranks. The Masque of the Frozen Stars refused to fight besides the Ynnari while few trusted the Eldar of Altansar, who had spent centuries in the clutches of the Warp. Many scoffed at the Corsair fleets. Eldar tempers were exacerbated by the Tyranid Shadow in the Warp. In the end, it was the authority of Biel-Tan and Saim-Hann that allowed the Eldar to remain a cohesive force. Not all were content with this, and fully half the Harlequins as well as the Ynnari contingent left the warzone.[1]

The remaining Eldar set to work. Strike forces raced to the Gilarian, Ylsan, and Faethala Systems to purge them of alien taint. Nimble Corsair destroyers and cruisers battled the Tyranid Bio-Ships while Striking Scorpions and Rangers stalked the creatures on land. Harlequins engaged in fast duels with broods of Genestealers. A council of Farseers decided that the greatest portion of the Eldar host would race to Oraloth, the next system in the Tyranids path. There the native aliens were fighting a cataclysmic war amongst themselves, leaving them terribly vulnerable against the Tyranids. Using the Webway, the Eldar quickly arrived on the world and knew they could not unify Laevenir's races amongst the invaders but could also not abandon it. A grueling, costly war lay ahead.[1]

The following forces are known to be engaged on Oraloth[1]