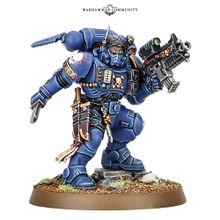 Vanguard Lieutenants are Primaris Space Marines Lieutenants, who serve in Vanguard strike forces. Typically, each great Chapter of the Space Marines will operate 100 standing Vanguard Battle-Brothers attached to the 10th Scout Company. These are overseen by the Master of Reconnaissance, who in turn is aided in his role by two chosen Lieutenants that have demonstrated an aptitude for covert operations.[2]

Lieutenants are skilled bladesmen, as well as dead-eye shots with their occulus bolt carbines. Their leadership qualities provide their Captains with support and tactical flexibility, which allow the Lieutenants to be assigned to oversee one or more critical aspects of a multi-faceted Vanguard battle operation.[1]