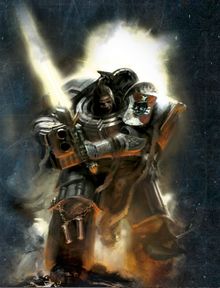 Brother-Captain is a high rank in the Grey Knights hierarchy, below Grand Master, their hierarchic role falling between what is defined as Captain and Veteran Sergeant in other Chapters.[Needs Citation]

Standing amongst the Chapter's foremost warriors, Brother-Captains are second in rank and experience only to a Grey Knights Grand Master. Each is a veteran warrior and commander who has been exclusively appointed from the ranks of the elite Paladins. Furthermore, a Brother-Captain is likely to have begun his service within the Brotherhood to which he is appointed, for to lead he must know intrinsically the rites, practices, and specialties of those he leads. Upon the battlefield, these warriors are placed in the very heart of the fighting, and as part of their training a Brother-Captain will learn how to make psychic contact with his warriors even amidst the fury of battle. This allows the Grey Knights in his presence to be filled with stillness of spirit and clarity of vision, and from this meditative state of purity they can better unleash psychic destruction upon the enemy.[3]

Each Brother-Captain has authority over an entire Brotherhood of Grey Knights and thus has multiple squads under their command. In matters of strategy and planning a Brother-Captain answers to none, not even to their Grand Master. Brother-Captains are known to gather many honors over their long careers, which often results in a dizzying number of titles for the most experienced of their kind. None as accrued so many as Aldar the Bold, whose traditional title of ‘Keeper of the Light’ has been supplemented by many other honorifics, of which ‘Slayer of the Bloodbeast’ can be considered the least, and ‘Liberator of the Solipsis Sector’ is by far the most prestigious. Whilst such a lengthy roster of honors can lead to ponderous moments at the Grey Knights’ high feasts – when each Captain’s titles must be announced in full – they stand as an important example of duty and heroism to all the Chapter’s warriors.[3] 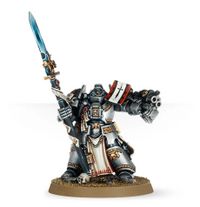