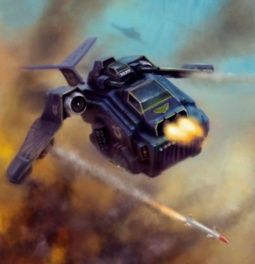 The Stormraven Gunship is a relatively new addition to the armouries of many Space Marine Chapters, such as the Blood Angels and Ultramarines, seamlessly combining the roles of dedicated gunship, dropship, and strike aircraft.

It is unclear just how the craft came into being; there are rumors of its STC file being discovered early in the 41st Millennium in a forgotten Martian archive, but the Stormraven has been in service with the Grey Knights for millennia before that.[2] As the situation for the Imperium has become increasingly desperate and since the Adeptus Mechanicus has judged its performance satisfactory, many Space Marine Chapters[3] and the Inquisition[5] now employ the Stormraven.[3]

Smaller than the Thunderhawk Gunship, the Stormraven is, not surprisingly, much more agile than its more well-known sibling, thanks to its wide array of vectored thrusters. It is this maneuverability that makes it an ideal support craft in environs (such as the crowded spires of a Hive City) where the deployment of Thunderhawks would be impractical or simply foolish.[1a]

The Stormraven's default load-out is a Twin-linked Heavy Bolter, a twin-linked Assault Cannon, and four Bloodstrike Missiles or Stormstrike Missiles, but this can be reconfigured depending on the required mission parameters (or simply the commander's personality). It may replace the heavy bolter with either a Typhoon Missile Launcher or a twin-linked Multi-Melta, and the assault cannon for either a twin-linked plasma cannon or lascannons. Finally there is the choice of adding a pair of Hurricane Bolters on its side sponsons.[1b]

The Stormraven can carry a squad of up to 12 Power Armoured Space Marines or a half-dozen jump pack-equipped Assault Marines, as well as a Dreadnought in the vehicle's rear magna-grapple.[1a] 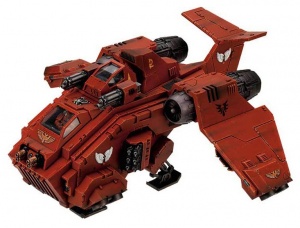