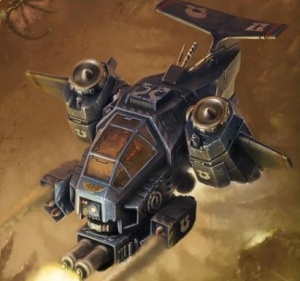 The Stormtalon Gunship is a small one-man flyer employed by Space Marine forces.

The Stormtalon is used by the Space Marines as both an air-to-air interceptor and ground attack aircraft. Swift enough to engage most enemy aircraft, it also packs a heavy armament of Assault Cannons, Missile Launchers, Heavy Bolters, and other weapons. The Stormtalon is a versatile vehicle, capable of serving as an escort fighter to protect Space Marine assets on the battlefield or as a close air support attack craft.[1]

To a few chapters, such as the White Scars, Raven Guard, and Hawk Lords, the Stormtalon has potential beyond close air support and interdiction. For these Chapters, the Stormtalon excels as a vanguard strike aircraft, able to keep pace with Assault Marines and Land Speeders. In these operations the Stormtalon's role is reversed, being used as the principal attack vehicle as opposed to simply a support craft. The remainder of the Chapter's rapid-moving elements act as escorts, clearing the way of anti-aircraft fire.[2]

The Stormtalon can be equipped with an array of weapons including[1]:

A short GW video featuring the Stormtalon can be found here.