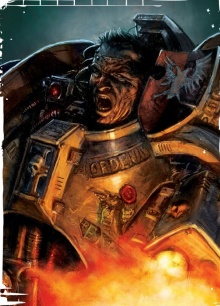 Brother-Captain Arvann Stern has served the Grey Knights for many long years and is a prominent Daemonhunter. Stern is nearing his fourth century in the Emperor's service, but he continues to serve within the 3rd Brotherhood.[2]

Stern's fate is inextricably linked with that of the Lord of Change named M'Kachen, the instigator of the Cult of the Red Talon. During the Ordo Malleus's destruction of the cult, Stern faced and banished the daemon back into the warp for one hundred years and a day. When the daemon was able to return to the mortal realm he was determined to find Stern and devour his soul. The two have faced each other in battle several times. If unable to personally face Stern, M'kachen sends one of his most powerful servants to attempt the deed for him.[Needs Citation] Stern has battled M'kachen three times so far. Each time, the Brother-Captain has proven his ability to withstand the power of the daemon and defeat the creature.[Needs Citation]

Stern also took part in the final stages of the Siege of Vraks in late M41, helping to defeat the Daemon Prince Uraka Az'baramael.[1] He later worked closely with the Space Wolves during the Siege of the Fenris System after discovering that the Wulfen were not a Chaos-corrupted threat.[4]

During the Age of the Dark Imperium Arvann Stern resurfaced, leading the 3rd Brotherhood in the Assault on Sortiarius alongside the Dark Angels 5th Company.[5]

Stern is armed with a Nemesis Force Weapon and has a Storm Bolter integrated into his Terminator armour. He is also a trained psyker and has a plethora of Psychic powers at his command.[Needs Citation] 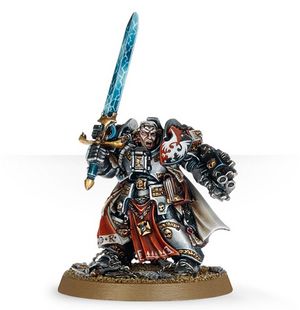