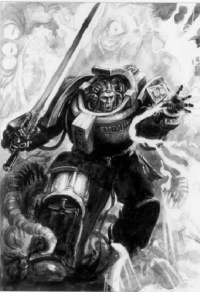 All Grey Knights have some measure of psychic talent, but few battle-brothers exercise it with free rein. For most, careful training and supervision allows them to focus their abilities in concert with those of their battle-brothers, and even then along specific lines only – the use of Nemesis force weapons, and of the psychic powers particular to the squad in which they serve. However, those who prove to have a strength of mind far greater than that of their fellows will go on to join the ranks of the Chapter’s Librarians.[1]

Grey Knights Librarians have a will of iron. They must, for the sorceries they wield are far more powerful than those of their battle-brothers, and thus shine infinitely brighter in the Warp. To show the slightest wavering, the most momentary of weaknesses, is to offer oneself up to otherworldly predators and to eternal damnation. On the battlefield, Librarians use their incredible powers to support their battle-brothers. This often manifests in a display of raw psychic might, such as a roiling vortex or bolts of eldritch lightning.[1]