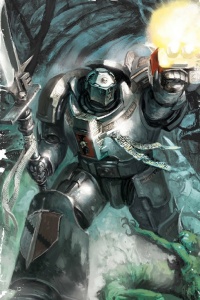 Each Terminator is armed with either a Storm Bolter and Nemesis Force Weapon or with a Thunder Hammer and Storm Shield. They may also take one Incinerator or Psycannon. They are also sometimes seen using the psychic power Holocaust. As there is no doctrinal restriction on the type and number of weapons carried, it is rare for two Terminator Squads to bear exactly the same weapons configuration; the Grey Knights have always favored efficiency over organizational mandate.[1]

Grey Knight Terminator Squads are designed to get into the thick of the enemy and eliminate the strongest and most central figure of any daemonic horde. When that happens, the link between the warp and real space is likely to be destroyed and any daemons will retreat to the warp, removing much of the strength of traitor armies. Terminators tend to go in after Grey Knights Squads have secured a beachhead and finish the job while the other Grey Knights hold back the enemy.

Usually a rarity in most Space Marine Chapters, Tactical Dreadnought Armour is so plentiful in the Grey Knights that nearly the entire Chapter can don them. Yet formidable though the armor is, to combat the Daemons of Chaos a different breed of warrior is required. Grey Knight Terminators rarely operate a standard line of battle, instead usually concentrating their attacks and carefully picking a prime target. As a result, Terminators often choose to teleport straight into the heart of battle, catching their enemies unaware in a storm of firepower and blades.[1]