The Striking Scorpions are one of the forms of Aspect Warriors used by the Eldar, focusing on the close combat aspect of battle. They epitomise the deadly attributes of their namesake, which can sting and kill a creature many times its size. Preferring to stalk their enemy and strike at them from the shadows, they are merciless killers who revel in the hunt and the kill.[1a][3a] 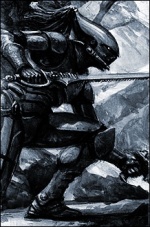 An Eldar Striking Scorpion in battle

The history of the Striking Scorpions is shrouded in infamy from their very beginning. The founder of their Aspect Shrine, Arhra, was lured to darkness and betrayed Asurmen and the other Asurya by bringing daemons into the First Shrine to wage war upon his fellow Phoenix Lords. Those loyal to Asurmen were defeated and scattered across the stars, but Arhra himself would eventually flee into the Webway, becoming "the Fallen Phoenix who burns with the dark light of Chaos." In his place rose Karandras, Arhra's greatest pupil, who would give the Striking Scorpions their current form by tempering the murderous nature instilled by the former master with the patience necessary to become consummate hunters. Karandras would be responsible for spreading this new teaching and installing new Aspect Shrines on the Eldar Craftworlds.[2b][6a]

Striking Scorpions are not only among the most powerful and violent close-combat specialists fielded by the Eldar, but excellent infiltrators, stalking their prey through the shadows before falling upon them like the wrath of Khaine himself.[1b][3a][5] Compared to their closest cousins, the Howling Banshees, Striking Scorpions are not as swift but instead more adept at moving through dense terrain, using every available nook and crevice to lie in wait of the enemy before unleashing their attack.[2a][3a] Only those Eldar of strong physique can become Striking Scorpions in order to wear their armour and wield their weapons.[2a]

A squad of Striking Scorpions typically number five to ten warriors, one of which is usually an Exarch, which can easily fit into a Wave Serpent transport.[3b] 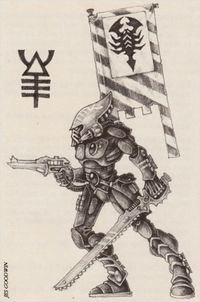 The weapons of the Striking Scorpion are tied into their close-combat nature and consist of the Scorpion Chainsword, Shuriken Pistol, Plasma Grenades and Mandiblasters.[3b] The chainsword is a vicious weapon with diamond-toothed edges capable of cutting through flesh as well as armour.[2a][3a] The pistol, while giving the warrior additional reach, is primarily a close combat weapon to compliment the cuts and parries of the chainsword. In the hands of a Striking Scorpion it can be used to distract or incapacitate an opponent, allowing for a killing blow with the chainsword.[6b] The pistol includes a viewfinder psychically linked to the warrior, which can provide a view-within-a-view in the corner of their eye known as the Scorpion's Eye. Through it a Scorpion can see through various spectra, both visible and invisible, as well as provide friend-or-foe identification. This ability is most useful when targeting opponents at range but can be distracting in close quarters.[6c] The signature weapon of the Striking Scorpions though is the Mandiblaster, incorporated into the helm of their armour, capable of delivering a devastating energy sting to blast their opponent into submission before being finished off.[1a][3a]

The Aspect Armour of the Striking Scorpions is similar in construction to that of other Aspect Shrines, but incorporates heavier, rigid armour plating for increased protection.[1a] While the extra weights means Scorpions are not as swift as their Howling Banshee sisters,[3a] the protection they provide is such that even Bolters are virtually useless against them, requiring concentrated fire from multiple weapons in order to bring down Striking Scorpions.[4] The armour's coloring is predominately green, with different patterns of yellow, black or orange depending on each individual Shrine.[1b] Besides the Mandiblasters a Striking Scorpion's helm also includes wide spectrum viewing, allowing for example to not only spot an animal hidden underwater but see the workings of its internal organs.[6d] 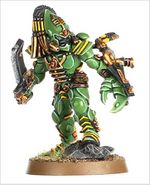 An Exarch is the leader of an Aspect Shrine, one who has journeyed so far down the Path of the Warrior that they become lost and cannot leave it. They wear more elaborate and ancient versions of Aspect Armour which contain the souls of past Exarchs, giving the wearer their knowledge and guidance as well as a pool of raw psychic energy.

Exarchs of the Striking Scorpions are definitive shadow-warriors, embodying all that their Shrine stands for. They are adept at shadowstrikes, becoming one with the shadows and using them to shield their squad from the enemy as they approach, and their excellent abilities as stalkers allows them and their squad to flow silently and without a trace through dense terrain.[3a] Some Exarchs will replace their shuriken pistol with a Scorpion's Claw and/or replace their chainsword with a Biting Blade. Still others will instead wield only Chainsabres, ancient gauntlets fitted with twin-linked shuriken pistols.[3b]