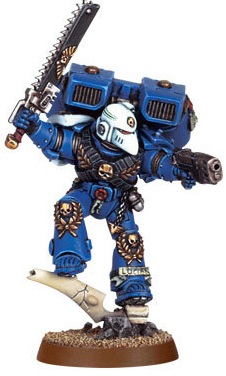 Vanguard Veterans are members of the First Company of a Space Marine Chapter who specialize in close combat and are thus ideally suited to spearhead any offensive action.[1a]

While every member of the Chapter's 1st Company is proficient in all manner of weaponry, those of the Vanguard Squads have completely immersed themselves in the art of close-quarter fighting.[1a] Having served for lengthy rotations among their Chapter's Assault Squads, Vanguard Veterans are some of the best hand-to-hand fighters in the Chapter.[1a]

Therefore they are armed with Bolt Pistols, Chainswords, krak and frag grenades and wear jump packs; however their position in the Chapter gives them access to more specialized weapons from the Chapter's armoury, such as Relic Blades.[1a] Such is the honour and rarity of this ancient weaponry that Vanguard Veterans will fight even harder to recover them from the battlefield.[1a]

Vanguard Squads are most often used as rapid-reaction forces, used to attack the weaker points in an enemy's line or to reinforce an ally in trouble.[1a] Due to their equipment and fighting style they rarely remain stationary and after destroying one enemy quickly move on to engage another. Vanguard Veterans are often in friendly rivalry with their battle-brothers, Sternguard Veterans, due to differences in their fighting styles.[1c]

Besides their standard equipment, Vanguard Veterans have access to their Chapter's entire arsenal of close-combat weaponry, including[1b]:

They may also choose, instead of their jump packs, to ride into battle in one of the following:[1b]