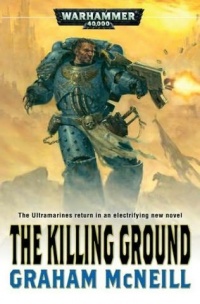 Pasanius Lysane is a Veteran Sergeant of the 4th Company of the Ultramarines, and the best friend of Captain Uriel Ventris.[1]

Like Ventris, Pasanius was born on Calth, and the two boys grew up together. As Aspirants to the Ultramarines, the pair remained together throughout their training at the Agilesus Barracks and their subsequent service in the Ultramarines. Before his induction into the Space Marines, Pasanius was already a towering youth, noted as being as large as a fully grown man despite being only 15 years old. As an Ultramarine, his physique was comparatively massive, dwarfing other Astartes. His Power Armour incorporates salvaged pieces of Tactical Dreadnought Armour & his primary weapon was a heavy Flamer.[1]

Shortly after Uriel's promotion to the Captaincy of the 4th Company, Pasanius accompanied him as one of his senior sergeants, during the Company's mission to Pavonis. Pasanius fought bravely in the Ultramarines' numerous engagements, including the boarding of the Dark Eldar starship Stormrider, the storming of the Imperial palace to rescue Governor Mykola Shonai from captivity, and the final Battle of Tembra Ridge, where the traitor Kasimir de Valtos unearthed the Nightbringer, an ancient C'tan deity.[Needs Citation]

In the fight against the Nightbringer and its Necron bodyguards, Pasanius lost his right arm to the C'tan's blade, but survived the battle.[Needs Citation]

Pasanius received a bionic replacement arm, but was troubled because it felt unusually cold to the touch, and looked like gleaming silver[1].

He accompanied Uriel and the 4th Company to Tarsis Ultra, to assist in the defense from a tendril of the Tyranid Hive Fleet Leviathan. Again, he fought honourably in many engagements, including the early defenses of the city of Erebus, and Uriel's desperate mission with a Deathwatch kill team to recharge one of the planet's drained laser defense emplacements.[Needs Citation]

Before the final battle, Uriel made the radical decision to lead the Deathwatch team on a boarding strike against the Tyranids' last remaining Hive Ship, leaving command of the Company to his other senior sergeant, Learchus Abantes. Pasanius accompanied Uriel on the mission. The team welcomed his assistance, all the more so since their flamer-wielding member had been killed earlier. Unlike Uriel, Pasanius did not repaint his armour black for the occasion (Uriel had served in the Deathwatch at some time in the past, but it is unknown if Pasanius ever did).[Needs Citation]

The mission was a success, infecting the Hive Fleet's Norn Queen with a poison that killed it and fatally disrupted the Hive Mind's control over the swarms on the planet.[Needs Citation]

After each battle, Pasanius noticed that his bionic arm repaired itself, despite taking heavy damage. He eventually realized that the arm had absorbed the living metal of the necrontyr. Pasanius kept this regenerative ability a secret, fearing the consequences should it be discovered he had such an unnatural power. Disgusted with himself and interpreting the bionic arm as a sign of moral corruption, Pasanius regularly scourged himself in an attempt to do penance.[Needs Citation]

After Tarsis Ultra, Learchus reported both Uriel and Pasanius for breaking with the Codex Astartes, abandoning their company during combat. Stripped of rank and all Ultramarines insignia, the pair were sworn to a Death Oath. While traveling on a ship, they were abducted by the Omphalos Daemonium and carried to Medrengard, the Iron Warriors' home planet inside the Eye of Terror. There they formed an unlikely alliance with a loose company of other renegade Space Marines, and the Unfleshed, a group of disfigured mutants.[Needs Citation]

Uriel and Pasanius were eventually captured by Warsmith Honsou, and Pasanius's bionic arm was surgically removed (it would later be grafted onto Honsou's body, to replace an arm he lost). Assuming they were renegades, Honsou offered the two former Ultramarines a place at his side; both of them spat the offer back in his face.[Needs Citation]

Against the odds, the two managed to escape the fortress and destroy it, along with most of Honsou's Grand Company. This had been the Omphalos Daemonium's purpose, and it abandoned its Daemon Engine, which Uriel, Pasanius, and the Unfleshed used to escape Medrengard.[Needs Citation]

After a tumultuous journey through the Warp, the Engine eventually deposited them on Salinas, where they were caught up in an ongoing insurgent war between the Imperial administration, headed by Governor Leto Barbaden, and the rebellious population. Although they were lawfully required to support the administration, Uriel and Pasanius were both troubled by the unrest among the population, and worried over a means of rehabilitating the Unfleshed.[Needs Citation]

Matters came to a head when the Unfleshed were possessed by the spirits of dead civilians who had been massacred by the Governor's forces. In their efforts to quell the violence, both Ultramarines were taken prisoner by the Grey Knights, who had arrived to prevent an outbreak of Chaos.[Needs Citation]

Both Marines were separately subjected to a series of ordeals to test their purity; Brother Leodegarius later remarked to Uriel that Pasanius had demonstrated remarkable loyalty to his friend. At the end of their ordeal, both Marines were pronounced free of taint.[Needs Citation]

When Chaos threatened to overwhelm the planet, Uriel and Pasanius stormed into a medical facility with the Knights, where the rebels' leader was hiding. Before they could kill him, the leader assailed them with visions of the massacre carried out by Barbaden's troops. Seeing it, both Uriel and Pasanius agreed that Barbaden was guilty and deserved no pity. At Uriel's urging, the Grey Knights dropped a psychic barrier they had erected around Barbaden, and the spirits of the dead killed him, and then rested in peace.[Needs Citation]

A ship arrived at Salinas to carry them home to Macragge.[Needs Citation]

Before the 4th Company's second deployment to Pavonis, Uriel was reinstated as Captain, but Pasanius did not accompany him. Although the two had completed their Death Oath, Pasanius was still ordered to do penance for keeping the truth about his arm secret. Serving this penance meant he could not return to active duty by the time of the deployment, and he and Uriel both felt the other's absence keenly.[Needs Citation]

During Honsou's invasion of Ultramar, Pasanius accompanied Uriel and the rest of the Fourth Company to Calth. While Uriel formed his own Command Squad, the "Swords of Calth," Pasanius formed his own Tactical Squad, nicknamed "The Firebrands" (possibly a tribute to their prodigious use of Flamers during the Pavonis campaign).[Needs Citation]

The Swords of Calth and the Firebrands both followed Honsou's trail to the secret tomb of Remus Ventanus, hidden in a cavern that few people had ever seen. In their youth, both Uriel and Pasanius had taken part in a challenge popular among the boys of their community, to climb to the highest possible point in a nearby cavern and leave their personal graffiti as proof. Though they did not realize it at the time, they had glimpsed the path to Captain Ventanus's tomb.[Needs Citation]

Both of them narrowly survived the final fight with the Iron Warriors, and then led the Fourth Company to Talassar, to relieve the besieged First Company, led by Chapter Master Calgar from the daemon forces of M'kar.[Needs Citation]

During the Indomitus Crusade Pasanius fought under Ventris on Sycorax against the Necrons.[8]