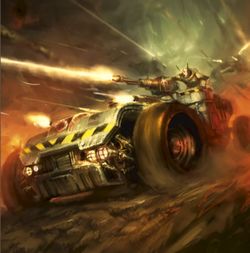 The Achilles Ridgerunner is a type of Imperial vehicle that is traditionally employed by mining guilds and geological surveyors as exploration vehicles that is often used by Genestealer Cults.

A common mining, exploration, and construction vehicle in the Imperium, the Achilles Ridgerunner is employed by mining guilds and geological surveyors. Ridgerunners range into deadly frontier environment, their pilots scanning for promising resources and communicating their locations back to base. The Mining Lasers mounted on the vehicle are typically used to unearth rich seams of minerals, but these powerful energy emitters can also be lethal to armor and flesh. Standard armament also includes Heavy Stubbers to repel hostile fauna, raiders, or xenos threats. Their heavy chassis and rigorous suspension also makes them well-suited for bombed-out cities and urban terrain.[2]

Like many civilian vehicles, the Achilles Ridgerunner has been converted to military use by Genestealer Cults. Made into an efficient outrider and scouting vehicle, upgrading its weaponry to include Mortars and Missile Launchers. Their main duty in Genestealer hands is to ride ahead of the Cult's main forces, scouting out potential ambush sites and new routes of ingress into the foe's territory. Many Ridegerunner crews include a spotter equipped with magnoculars, whose task it is to identify and relay enemy troop movements and weak points. This vital data is then sent back to their brood's lair, where it is then disseminated by Nexos strategists. Other Ridgerunners will carry Flare Launchers, usually employed for signalling and coordinating ambushes and outflanking maneuvers as well as providing a smokescreen to hide the vehicle's advance.[2]