Hunt for the Wulfen 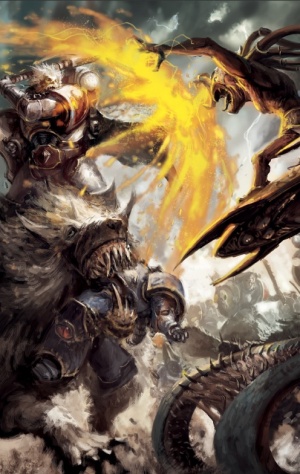 The Hunt for the Wulfen was a major expedition by the Space Wolves conducted in the closing days of the 41st Millennium.[1a]

When Wulfen openly returned to the Imperium to rescue the Space Wolves of Harald Deathwolf in the Battle of Nurades, they were immediately sent to Fenris to await judgement. Standing before Logan Grimnar himself, Ulrik proclaimed that the return of the Wulfen was an omen that Leman Russ' return was imminent. A fierce debate over the future of the Chapter and what to do with the Wulfen erupted. Ultimately, Ragnar Blackmane proclaimed that the Wulfen must be gathered and brought to Fenris before they were found by the Inquisition or other Imperial authorities. Thus the Great Companies of the Space Wolves set off to gather the Wulfen, which were now being spotted near Warp Storms, in the hopes they could lead them to the Space Wolves' lost Primarch.[1a]

As Warp Storms emerged in ever-greater numbers, creating major Daemonic incursions, the Space Wolves rushed to key Warp Storms to recover Wulfen that always seemed nearby. Krom Dragongaze is left in charge of protecting Fenris as the Wolves begin their hunt.[1a]