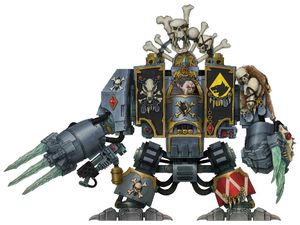 In 960.M41 on the hell world of Omnicide, Logan Grimnar’s Great Company stumbles upon a feral Space Wolf Dreadnought carving its way through a force of Chaos Space Marines. After a fierce struggle, the murderous machine is captured and frozen in stasis, before being taken back to the Fang for study.[1]

The identity of the once-noble hero within its sarcophagus is long lost, consumed by the bestial thing that now leers from its facade. In times of great strife, the machine-beast is released from its glacial prison and set upon the foe, and it will claw and stamp and bite until nothing is left but ruin. At battle’s end, the Space Wolves will freeze it with helfrost technology, hoping that Murderfang’s wrath can be stayed for long enough to see it contained once more in the caverns beneath the Fang. Yet all know that as the Time of Ending approaches, the white heat of its rage will be needed more than ever.[1]

During the Hunt for the Wulfen in the 999.M41 Murderfang helped Logan Grimnar to find the Wulfen on the doomed planet of Vikurus. It seems that Dreadnought shared some kind of unspoken communion with the Wulfen warriors.[2]