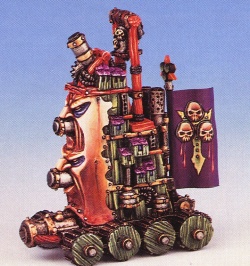 Nurgle Plague Tower is a very powerful Daemon Engine dedicated to Nurgle.[1][2] This foul construction is a medieval siege tower reborn as the enemy's worst nightmare.

The Tower is unbelievably resilient, able to withstand the punishment that would fell any Imperial tank. It also shelters a host of Nurgle's twisted followers in its innards, allowing them to fire at their weakening enemies from the safety of this construct.

A Plague Tower is armed with a pair of Demolisher cannons, to deal with hostile armour, while its Pus Cannon and Plague Mortar allow it to slaughter enemy infantry with the enormous quantities of vile pus.[1][2]

Only the suicidal would dare to attack the Tower in close combat. Not only is the tower defended by swarms of crazed Nurglings but should attackers succeed in destroying the tower they are likely to be drowned in an explosion of pus and filth as the Daemon-machine dies.[1][2]