Silver Towers of Tzeentch over Fenris

Silver Tower of Tzeentch is a Daemon Engine of Tzeentch, the Dark God of Sorcery. A Silver Tower forms an outlandish sight - a collection of stunningly beautiful, intricately carved towers resting upon a circular disc; it floats above the battlefield supported by nothing but sorcery. The Tower is of full of dozens of Tzeentchian Thrall-Wizards, whos' sorcery drives the powerful weapons the tower is armed with.[1]

The Master of each Silver Tower is an Exalted Sorcerer of Tzeentch - magician of the great knowledge and power.[4]

The Silver Tower's weapons are fueled by the powers of the Thrall Wizards aboard and take the form of sorcerous blasts of Warp power.[1]

In addition to its considerable offensive capability, a Silver Tower is protected by powerful wards which form a wall of energy shielding not only the Tower itself, but also other nearby allied vehicles and infantry.[1] 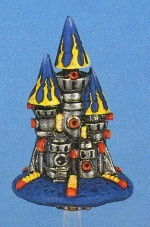