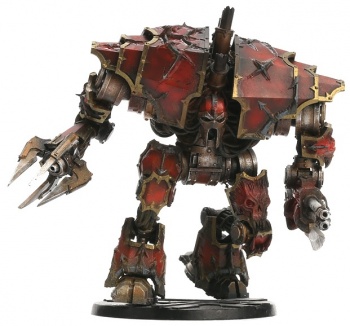 The Decimator is an unholy Daemon Engine; the essence of a creature of the Warp bound within the armoured bulk of a bipedal war machine. Armoured with slabs of tainted ceramite and adamantium, and a low-set ‘head’ give the Decimator a characteristic hunched posture which exudes brooding and vicious menace.[1]

Decimators are hellish creations - horrific amalgams of human and Xenos technology fused and brought to unholy life by the darkest warp sorcery. Recorded in the forces of the Great Enemy as long ago as the mass genocides known in Imperial Lore as the "Grief of Herodin" in late M35, they have fortunately been rarely encountered, save within the damned cults and daemon fleets that plague the benighted reaches of the Nightmare Rifts far to the Galactic South of the Segmentum Tempestus. Here in the dark void beyond the borders of the Imperium, some unknown source, it is believed, barters these dread killing machines for a high price in blood, plunder and souls. This has led some within the Ordo Malleus to label them the work of the infamous Dark Magos of the Silent Forge known as the Sepktraal Cult, which legend has it was driven to the rifts beyond the Silent Abyss during the Great Scouring, while others insist that the cult never existed at all except in the myths of the forgotten age.[1]

Inquisitorial savants do not know for sure what malefic party is responsible for this sinful innovation as the Decimator is capable of fielding a wide range of terrible armaments: rapid-firing Butcher Cannons, multi-barrelled Stormlasers, Soulburner Petard[1], Heavy Conversion Beamer[2] and great raking Siege Claws to name but a few. Towering over even the mighty Contemptor Pattern Dreadnoughts of the Adeptus Astartes, the Decimator is believed to be an attempt to bolster the ranks of such ancient devices that still serve the Traitor Legions. If this is the truth, then it is feared that many warriors of the Imperium will fall before these deadly war machines.[1]