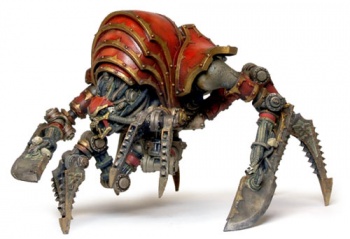 The Blood Slaughterer is a Chaos Daemon Engine devoted to Khorne, larger than a Dreadnought, the Blood Slaughterer has a hunched, tick-like appearance and is armed with a multitude of monstrously large claws and blades making it a formidable weapon of war on the battlefield.[1] 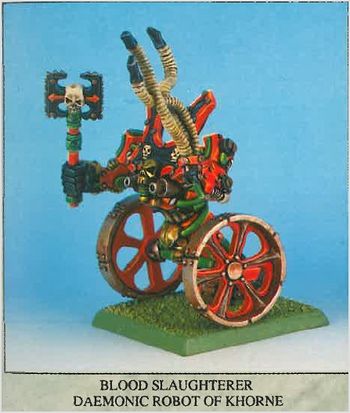 The Blood Slaughterer was a Daemonic robot of Khorne, a small vehicle with two wheels, available to late 1st Edition and early 2nd Edition Chaos armies. The Slaughterer was daemonically possessed and subject to frenzy. Traveling swiftly on iron-bound wheels, it carried twin-linked Heavy Bolters, a Chainaxe and a Lash of Khorne. The Lash was a powerful energy whip, crackling with energy, the iron claws at the tip of each whip dripping in corrosive venom.[1]

The Slaughterer was one of Khorne's daemonic machine creatures of iron and brass. It was protected by a daemonic aura, making it harder to kill than usual. However, with the advent of the Codex: Chaos (2nd Edition), the Blood Slaughterer was phased out of the Chaos army list.[1]