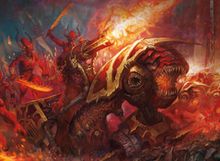 The Skull Cannon of Khorne is a Daemon Engine of Khorne

Skull Cannons are manned by the same Bloodletters that forged the machine itself. A monstrous fusion of Daemonic spirits and hellforged machinery, its spiked wheels grind across the battlefield and mangle all in their path. Those in its way are fed into the Skull Cannon's gaping maw, there to be roased by daemonic fire and broken up into fragments. These remains are for the most part ejected from the Skull Cannon's rear, for only the skulls of its victims are retained. These are then fused with the Blood God's wrath, set alight, and blasted in a fiery wake from the daemon engines cannon. Skull Cannons are so monstrously efficient that the Ordo Malleus believes they may have been forged by Khorne's own hands.[1][2][3] 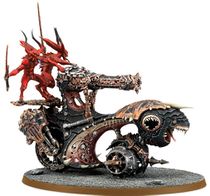