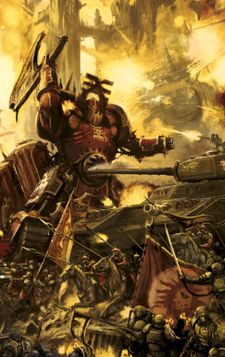 A Lord of Skulls battles an Imperial Guard Baneblade

The Lord of Skulls is a gigantic Daemon Engine of Khorne.

Wrought only by the most skilled Warpsmiths with the bound spirit of a Bloodthirster[3], the engines of this towering contraption are powered by the boiling blood of murderers. Lords of Skulls are built in hell forges with the sole purpose of annihilating its enemies.[1] Given its status as a prison of Bloodthirsters, Lord of Skulls are often worshiped by accompanying Daemons who will stack gathered corpses and skulls atop the engine during battle. Though it is considered as incarceration by most Bloodthirsters, still there are few of them (mostly from the eighth rank) who consider the Lord of Skulls like a suit of armour within which they may unleash war on the denizens of realspace.[5]

Lords of Skulls are armed with a variety of heavy weapons, such as a gigantic Great Cleaver of Khorne mounted on its right arm and a Skullhurler or Hades Gatling Gun on its left. Long-range weapons include a chest-mounted Ichor Cannon, Daemongore Cannon, or Gorestorm Cannon.[2] 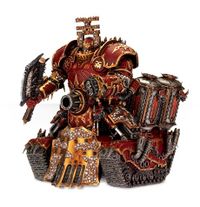