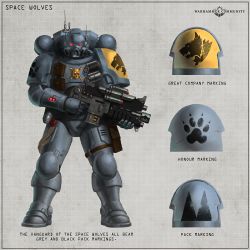 Vanguards are Primaris Space Marines that are ruthless killers who are trained in covert operation. They operate behind enemy lines as saboteurs, assassins and infiltrators.[1] 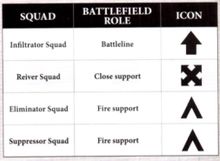 Vanguard Space Marines are elite reconnaissance troops, trained to operate without support across the deadliest frontiers of the galaxy. Ranging far ahead of the main battleline, they slip deep into hostile territory and prosecute a full-spectrum campaign against the enemy. Every component of the enemy is sabotaged and dismantled: communications are cut off, supplies are demolished, and moral sapped by psychological terror-strikes. When the enemies are on their knees, the Vanguard Space Marines emerge from the shadows to perform the killing strike. Vanguard Space Marines prove no less devastating when fighting in concert with conventional battleline troops.

First deployed on the designs of Roboute Guilliman during the Indomitus Crusade, each of the "great" Space Marine Chapters now possess their own Vanguard complement. So impressed was Guilliman with the performance of Vanguard troops that he made a number of amendments to the Codex Astartes to better accommodate them into Space Marine ranks. These new amendments sees most of the great Chapters typical operating around 100 Vanguard Space Marines attached to the 10th Scout Company. These troops fall under the command of a Captain known as the Master of Reconnaissance who is in turn supported by two Space Marine Lieutenants that have displayed an aptitude for covert operations. Even chapters that are not codex-compliment such as the Space Wolves and Black Templars ensure that they maintain a standing formation of Vanguard Space Marines.[2]

In the years since, Vanguard Space Marines have proven vital in reclaiming worlds lost within the Dark Imperium.[2]

Space Marine formations composed entirely of Vanguards, are known as Vanguard Spearheads. They have the express goal of stealthy penetrating deep into enemy territory, to sabotage supplies, cause mayhem, and assassinate high-priority targets.[5]

No matter their role, all Primaris Space Marines are trained and indoctrinated in Vanguard tactics and are able to don patterns of Mk. X Power Armour. In addition, during their time in a Chapter's Scout Company, all Space Marines are fully trained in the use of Vanguard armour variants and associated wargear. Battle-Brothers from a Chapter's reserve companies may be temporarily seconded to the Battle Companies as Vanguard Space Marines, taking on the colours and markings of their new company for the duration of their service.[2]

Due to their extended time behind enemy lines, Vanguard Space Marines are drilled heavily in the art of survival and self-sufficiency and have their own corps of medical specialists trained by the Apothecarion.

Vanguard Space Marines operate a variety of equipment all geared towards stealth and covert operations. They don the stealthy Phobos Pattern or in the case of Suppressor Squads Omnis Pattern variants of the Mk.X Power Armour. They wield specialized weaponry such as Instigator Bolt Carbines, Occulus Bolt Carbines, and Accelerator Autocannons. Other specialized equipment includes Omni-Scramblers and Cameleoline Camo-Cloaks.[2]

Vanguard Spearhead formations are given access to specialized equipment, such as Morbidus Bolts, Saboteur Explosive Packs, Marksman Target-Trackers and the relic Armour Umbral.[5]