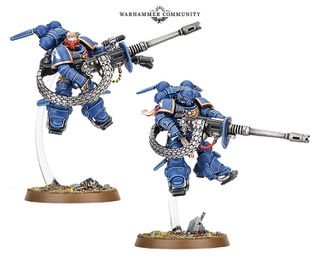 Suppressors are fire support warriors clad in Omnis-Pattern Power Armour, itself a variant of the Gravis Pattern of Mk. X Pattern Armour. The Omnis Pattern is lighter than the standard Gravis configuration and equipped with Jump Packs, Grav-Chutes, and shock-absorbers. Although they are equipped similarily to Inceptor troops, Suppressors do not strike into battle from low orbit. Instead, they rely on Jump-packs and grav-chute arrays to maneuver into enfilading positions where their Accelerator Autocannons will tear through heavily armoured enemies and light vehicles.[3]