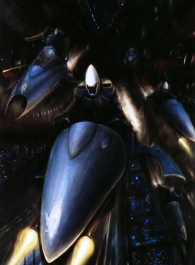 These units are commonly assigned as forward scouts for the main Eldar host or as a rapid-response force, using their twin hull-mounted Shuriken Catapults to strike down the enemy as they speed past them in a brightly-coloured blur. Numbering three to twelve Guardians, it is typical for every third jetbike to instead be armed with a Shuriken Cannon, while a jetbike-mounted Warlock will sometimes join a squadron to lend them their aid.[1][2]

The Windriders are rightfully proud of their mastery of these impressive vehicles. Upon the cowling of each jetbike, the heraldry of the craftworld and sometimes the specific Windrider squadron are emblazoned in pride of place. These colors are invariably bold and defiant. It is considered a singular honor to join the Windrider hosts in battle, especially upon Craftworld Saim-Hann, where Winderiders ride to war in their thousands.[4]