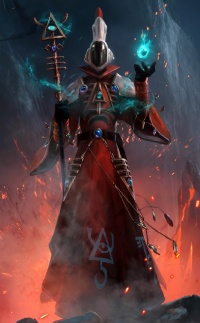 Spiritseers are experts in summoning and guiding the spirits of the dead into Wraith Constructs, specifically Wraithguard and Wraithlords. It is said that the first Spiritseer was a Farseer of Craftworld Iyanden who mourned the loss of his lover, plunging himself into the Infinity Circuit to be with her. Amid the swirling otherworld of the departed, he found himself able to bridge the gap between the living and the dead.[3]

Of all the Craftworlds, Spiritseers are most common in Iyanden, as this particular Craftworld has a very small population and even fewer warriors. The most powerful Spiritseer among them is Iyanna Arienal, "the Angel of Iyanden", who is doing everything she can to save her home and her people.[1a]

The Spiritseers' special training has hardened their own souls against the danger of becoming too enthralled by their command over the dead and thus actually becoming a true necromancer. The use of the Wraithguard and the Wraithlords is only a last resort by the Craftworlds and only when their Farseers believe that they face the direst necessity. The use of such units is seen as little better than engaging in petty necromancy among the Eldar, but is tolerated because the Eldar's low population makes reliance upon their dead a necessity if the race is to survive in its weakened state.[2]