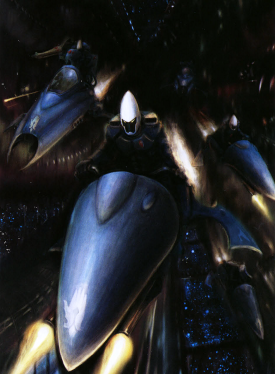 Eldar Jetbikes are single-person anti-grav vehicles commonly used by Eldar, Dark Eldar, and occasionally Harlequin warriors in battle. These sleek and elegant craft, capable of high speeds and extreme maneuverability, are testament to the Eldar's mastery of anti-gravitic technology, much to the amazement and jealousy of the Adeptus Mechanicus. On the battlefield they are commonly used as skirmishers, scouts, and fast-response units.[2][3a]

Contained within the body of the jetbike are powerful anti-gravitic motors, allowing the craft to attain such great velocity that without an Eldar's enhanced reaction speed it would be lethal to ride. Through subtle manipulation these motors can also send the bike into a steep climb or sharp dive,[3a] though its shape naturally inclines it towards level or upward flight.[1] Long, curved vanes on either side of the bike allow for incredibly sharp mid-air turns.[3a] Like most Eldar technology the jetbike is mentally attuned to the natural psychic abilities of the Eldar. Small patches of psychotropic crystals, within the bike's handlebars and the rider's gauntlets, allowing the rider to control the craft through mental commands.[1] For an Eldar to master the jetbike is an exhilarating challenge that can take years of practice to reach their full potential, but those who do are said to build a rapport with their steeds comparable to the horsemasters of legend.[3a]

Jetbike armament consists of twin-linked Shuriken Catapults, although special craft known as Shrieker Jetbikes instead mount a single Shuriken Cannon.[4] Jetbikes are most commonly used by Guardian Jetbike Squadrons for a number of battlefield duties, particularly the Wild Riders of Saim-Hann. The only known Aspect Shrine dedicated to the jetbike are the Shining Spears, a rare group found on only a few Craftworlds, but they are so in tune with their steeds that they can perform complex maneuvers with but a single gesture.[3b] As well, many war-leaders of the Eldar are also known to ride into battle on jetbikes, including Farseers, Warlocks and Autarchs.[3c] Those Autarchs who were once a member of the Aspect Shrine themselves will often ride alongside Shining Spears into battle.