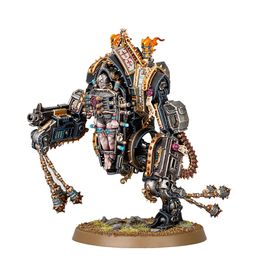 Mortifiers are variants of the Penitent Engines.[1]

Mortifiers are piloted by Sisters Repentia who have committed the ultimate sin: fleeing from battle. This is an act of evil which can not be forgiven, and as punishment these are given the immeasurably cruel fate of piloting a Mortifier Engine. Based upon the same mechanical chassis as the Penitent Engine, a Mortifier bears additional neuro-agonizer arrays and obloquial enhancers that amplify the pilot's self-loathing exponentially. Metallic bolts driven into the Repentias bones leave her unable to move or even scream for death, while the baffle hood placed over her head prevents her from hearing any words of piety that are spoken in her presence. Mortifiers are then placed on the frontlines where they are driven into such a frenzy by their intense suffering. As they engage in slaughter, all joy that would normally be experienced slaying the enemies of the Emperor is denied to them, stripping from their minds and replaced with more pain. The only hope of release from this state of torment is death. Yet even upon knowing they will soon die, Mortifier's still despair at the realization that they will depart unredeemed. This sends the machine into a tortured death throe.[3]

To those Repentia who not only fled, but betrayed their Sisters, an even worse fate awaits. After being wired into a Mortifier they are further entombed behind a thick adamantine casing resembling an Iron Maiden. This sarcophagus protects their tortured bodies from the release of death. Known as Anchorites, the Sisters inside these engines are forced to face their torment in absolute isolation, enduring years or even decades of agony before their inevitable end.[3]

The Mortifier utilizes firepower over the melee weapons used by Penitent Engines.[1] They normally wield Heavy Bolters or Heavy Flamers with flails or buzz saws for short-range attacks.[3] 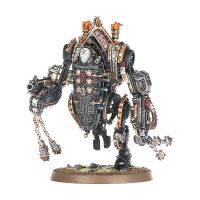