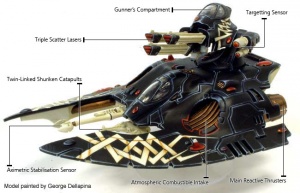 The Firestorm is a rare Eldar grav-tank based on the Falcon chassis. Designed for anti-aircraft warfare, the Firestorm is employed only in unique cases where Eldar aircraft are not available to achieve air superiority over the enemy, such as the Baran War where only vehicles Falcon-sized or smaller could fit through the wraithgates.[1][3]

The Firestorms are never deployed in great numbers, and only when there are not enough Nightwings to provide effective fighter protection or the great threat of enemy air attacks.[4]

While retaining many of the same features as found in the Falcon, including its transportation capacity, the Firestorm's primary difference is its armament. Firestorm Scatter Lasers are a complex array of triple-barreled Scatter Lasers which combine high accuracy with the capability of sustained fire. These are ideal for protecting Eldar hosts from enemy aircraft as well as potent anti-infantry weapons useful against hordes of Orks and Tyranids. The Firestorm is also armed with twin-linked Shuriken Catapults and/or a Shuriken Cannon, and can be further equipped with Vectored Engines, Star Engines, Holo-fields and Spirit Stones.[1][2][3]