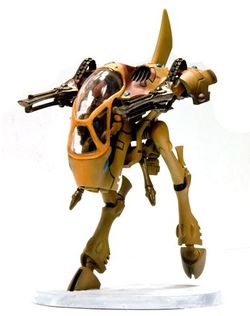 Forgoing the War Walker's normal duties of scouting the enemy the Wasp is instead fitted with a jet-assisted anti-grav system, enabling it deploy directly from a high-flying Vampire Raider as part of an air-mobile Corsair raiding party. Once on the ground the Wasp can then rapidly redeploy, making short leaps across the battlefield with its jump jets, to provide support for Corsair 'drop' troops.[1]

Wasps operate in squadrons of one to three walkers and for armament are fitted with two heavy weapons, either Shuriken Cannons, Scatter Lasers, Eldar Missile Launchers, Starcannons or Bright Lances. In addition to their jump jets some Wasps will also incorporate Spirit Stones.[1]