"Where the Neophyte sees only the difficulties and the Initiate only the advantages in any great enterprise, the hero sees both."[5] 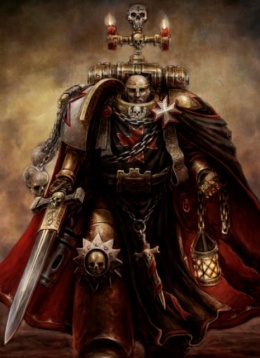 Helbrecht is the current High Marshal of the Black Templars Chapter.[1]

Helbrecht is best known among his friends and enemies for his violence, stubbornness, and desire to slay the enemies of the Emperor. The notice he received for his many violent campaigns aided his rise through the ranks and he secured a position in the Sword Brethren after he slew a Vampire which had risen to power on Cephian IV. When the crusade's leader, Marshal Daidin, was killed, Helbrecht was elected in his place.[1]

On the death of High Marshal Kordhel at the hands of a Chaos Champion, the Marshals unanimously chose Helbrecht in 989.M41 to succeed him after the subjugation of the Xenarchs of the Sigilare Nebula. He was ritually presented with the Sword of the High Marshals and immediately led a crusade against the Cythor Fiends in the Ghoul Stars. After eight years securing outlying systems, Helbrecht moved on to the homeworlds of the Fiends, only to find them empty. The crusade was cut short when a request for aid came from Armageddon: Ghazghkull Thraka had returned and the Black Templars channelled their energies into stopping one of the greatest Waaagh!s[1]. 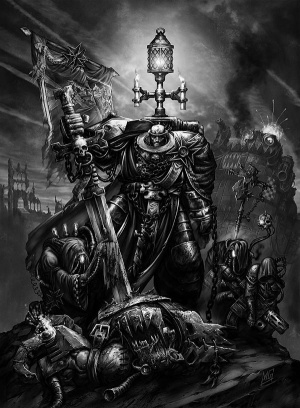 Helbrecht returned to the Eternal Crusader and contacted Marshals Ricard of the Dimaris Crusade and Amalrich of the Tiberior Crusade, ordering them to Armageddon. Upon arrival, Helbrecht assumed control of the space fleet, his skills in space combat honed by directing the vast fleet of the Black Templars, while the two crusades deployed to the surface. Helbrecht worked closely with Admiral Parol to storm and destroy Ork Roks and ships in an effort to stem the tide of reinforcements. When Ghazghkull's suspected command ship was seen retreating from Armageddon, Helbrecht swore an oath to pursue and destroy him. As a sign of respect, he allowed Commissar Yarrick to accompany him on the crusade[1].

Helbrecht, accompanying Commissar Yarrick, pursued the infamous Ork Warboss Ghazghkull Mag Uruk Thraka. However while they were able to corner his flagship Kill Wrecka, Ghazghkull was able to escape into the Warp and begin his Great Waaagh!.[4]

Helbrecht commanded the crusade that came to the aid of the Ice World of Schrodinger VII. The Necron Phaeron, Imotekh the Stormlord of the Sautekh Dynasty, had already shifted his armies into defensive configurations. Helbrecht's assault bogged down in a series of impeccably placed ambushes on the drop pod and Thunderhawk drop zones and Helbrecht and Imotekh met face to face on an ice bridge. They traded blows until Helbrecht collapsed but, instead of finishing him, Imotekh severed his right hand so he would always be reminded of the humiliation. The Black Templars retreated with Helbrecht, leaving Schrodinger VII in the Stormlord's hands[2a].

Following a five year Crusade of penitence to atone for his defeat, Helbrecht made a pilgrimage to the Phalanx to pray at the hand of Rogal Dorn. There, the Chapter Master came to realize that the loss of his hand was symbolic of his Primarch's sacrifice and a sign from the Emperor. Helbrecht faith returns to him.[3]

Helbrecht, aboard his Battle Barge Sigismund, later sought revenge for his humiliation by attacking Imotekh's Tomb Ship Inevitable Conqueror while in route to Davatas. Boarding Torpedo attacks by the Black Templars succeeded in capturing the ship and Helbrecht and the Stormlord come to blows once more, but this time the Marshal is able to use his rekindled faith to prevail. Realizing the battle is lost, Imotekh teleports to a nearby escort vessel to safety, but not before congratulating Helbrecht on 'one victory a piece'[2b]. In a rage that his enemy had escaped, Helbrecht destroyed the Inevitably Conqueror from the inside out.[3]

in the aftermath of the Great Rift's creation, the Black Templars lost contact with several of their Crusades. Helbrecht, though, still believes the lost Crusades are still alive and are continuing to fight the Imperium's enemies. While he was still hunting for Warlord Ghazghkull, he was visited by Lord Commander Guilliman about several matters concerning his Chapter. At first, Helbrecht worried the Black Templars would be censured for not following the Codex Astartes that Guilliman had written, but the Lord Commander made no mention of this. Instead he sought to convince the High Marshal to accept the ability to create Primaris Space Marines and accept the Indomitus Crusade's Greyshields into the Black Templars' ranks. Guilliman did so in person, because the openly fanatical Chapter were deemed amongst the most temperamentally unpredictable in how they would react to the Primaris' creation. The Lord Commander knew that if Helbrecht accepted them, then his approval would spread throughout the Black Templars' forces. The High Marshal readily did so, as he attributed a spark of the divine to the technology to create Primaris.[7a]

With that settled, the two then began to clash over Helbrecht's utterly focused pursuit of Warlord Ghazghkull. The Lord Commander reminded the High Marshal of the oaths he swore to protect the Emperor's realm, rather than just carrying out his own vendettas. Helbrecht was shamed by Guilliman's words and sought to immediately rectify his failings. The High Marshal then promoted a number of his most seasoned Sword Brethren to the rank of Marshal and bade them to muster new Crusades. The Black Templars' Primaris Greyshields were also mingled into the Marshals' forces to ensure they were accepted. Helbrecht then oath-swore these new Crusades[7a], including Marshal Holgher's Purgus Crusade[7b], to aid all those worlds of the Ecclesiarchy, that lay perilously along the Great Rift's border. With his duty done, the High Marshal renewed his vow to purse Ghazghkull to the ends of the Emperor's realm and continued his quest to hunt down the Warlord.[7a] As part of Indomitus Crusade Fleet Primus, Helbrecht led a Taskforce which saved the world of Sigma-Ulstari from Tyranid and Ork forces in the Octarius War. During the battle Helbrecht slew the Warboss Tuskagrob Wurldkilla.[8]