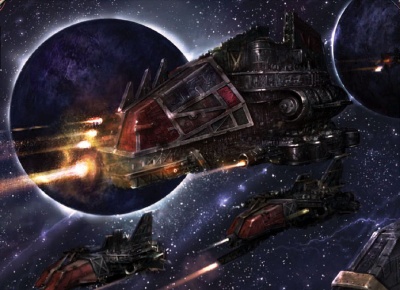 Ork technology is surprisingly sophisticated, capable of feats that should be impossible for contraptions of scrap metal and salvaged machinery. Ork weapons are every bit as dangerour as they are ramshackle - from poorly crafted firearms, that are about to jam after the first shot to clanking begemoths that rival the greatest of Imperial Titans in power. Ork space weapons are mostly limited to to crude, but effective slug-throwers and missiles as well as captured weaponry of other races, salvaged from Hulks and defeated ships, but some ships may feature powerful lance batteries or other unpleasant surprises. Their effectiveness in battle is hard to predict as it varies during a single battle as different weapons break down or get repaired, or even improved, all in the middle of a battle.[1][2]

Orks love weaponry and most Ork ships are covered from nose to tail in numerous small, quick-firing turrets. Mounted over the length of the hull, they are too puny and short-ranged to hurt enemy ships, but are used to shoot down incoming torpedoes and attack craft, thus protecting the ship and fulfilling the role of defence weaponry.[3]

Above all weapons Ork favour massive shell-hurling macrocannons grouped together in batteries. One battery comprises any number of different types of weapons, but most fire projectiles of one sort or another. Some of them are made from scrap while others are 'improved' versions of looted Imperial macrobatteries. Ork inclination towards firepower means that any gap in the haphazard armour plating is filled with a gun. Usually referred to simply as Gunz these Ork macrobatteries fire volley after volley of solid shot and explosive shells, overwhelming an enemy in a torrent of destruction. However, they don't always work as intended and are prone to misfires and jamming. They may also be deactivated for repairs or 'improvements' by Ork Mekboy. Overall, these weapons are unpredictable but most of the time are frighteningly effective.[1][2]

Alongside more conventional macrocannons Orks often mount massed batteries of very powerful but short ranged weapons on their ships. Known as Heavy Gunz, these batteries fire dense slugs of scrap metal massing thousands of tonnes as well as jury-rigged plasma bombs. These projectiles quickly become fatally inaccurate over long ranges so the ship becomes vulnerable to long ranged fire. Nonetheless they cause terrifying damage to any ship at close range.[1][2]

Often rebuilt from the largest broadsides of Imperial Cruisers, these weapons protrude menacingly from the scowling armoured prows of Kroozers. They often have extra-long barrels, so batteries of these weapons can unleash salvoes of heavy explosive shells over very long distances.[2]

Orks rarely use lance weapons since not every mek has the technology to produce them consistently or reliably. Lances found on Ork ships are usually rebuilt from Imperial lance weapons, often ending much larger than before for a slight improvement in characteristics. These heavily customised weapons are known as Zzap Kannonz and unleash a coruscating green bolts of energy, blasting holes in enemy armour, similar to smaller ground-based Zzap Guns. They are not common for Orks and are usually only found on largest Orks ships.[2]

Typically for all Ork technology, Ork Torpedoes are far from reliable, with some shooting off randomly as guidance systems fail, failing to ignite at launch or detonating prematurely if at all. The Orks make up for this by a truly Orky method - by firing more torpedoes. Between salvoes, Gretchin slaves descend into the launch tubes to hit faulty parts with hammers and wrenches in the hop. Unlike their Imperial counterparts, Ork ships never run our of torpedoes, as Orks can easily build new ones from "unnecessary" components taken from all around the ship.[1][2]