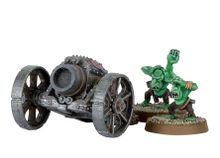 The Lobba is a type of Ork artillery weapon.[1]

The Lobba is a large Ork artillery piece firing in high arcs, 'lobbing' a high explosive shell into the air, much like mortars. It is often used to pound enemy infantry squads over intervening obstacles. Most lobbas look like big mortars or rokkits, although the Lobbas used by Snakebites or other primitive tribes may take the form of a catapult or trebuchet. They are often mounted on various Ork vehicles from Gunwagons to Battle Fortresses or used as Big Guns. When used in this role, Lobbas are Grot's favourite artillery pieces, because they don't require for them to expose themselves to the enemy to use them.[1][2]