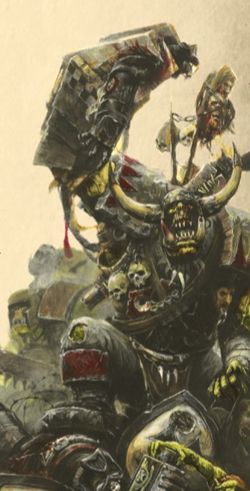 Ork Nobz who value the thrill of close combat often become meganobs. They are recognised by their bulky armour they wear into battle, which they call Mega Armour, and by a dogged belief of their own invulnerability. A suit of mega armour is compromised of extremely thick metal plates welded onto a piston-driven exoskeleton. It incorporates several engines and sub-motors that give the wearer tremendous strength. For weaponry, Meganobz wield a fearsome array of Kombi-Weapons, Kustom Shootas, Killsaws, and Power Klaws.[1, 3b]

Beast Snagga Nobz are Nobz who have joined the Beast Snagga culture and frequently lead lessers of their creed into battle. For these brutal Orks, the regular Squighog doesn’t offer quite enough power on the charge. Instead, they ride vicious Smasha Squigs, adorned with heavy armour.[10]