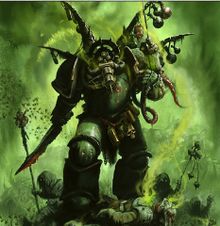 Biologus Putrifiers are a type of mutated warrior of the Death Guard. These are the refiners of the diseases created by the Foul Blightspawn.[1]

Biologus Putrifiers bear a unique mutation: lidless eyes that grow like cysts concealed beneath their flesh. Known as occulobes, the gaze of these can even penetrate armour to perceive every aspect of an infection’s spread through a body. They quickly record their observations, creating potent tomes of forbidden lore. Driven by an obsessive desire to test their plague-batches to perfection, Putrifiers take a very active role in spreading disease upon the field of battle, observing all aspects of plague and disease they encounter.[1]

Yet to simply observe is not their only duty. Samples must be extracted, and tests must be run, and for this they are armed with their Injector Pistols, which create a sick and agonizing death. Those specimens whose deaths are especially fascinating are pierced with injector pistols once again, this time to extract whatever clotted foulness now passes for their blood, ready for later study. Due to their deadliness, Putrifiers are often targeted on sight by the enemy. Yet should a Putrifier be struck by sufficient firepower or a powerful enough blow, the attack is liable to rupture his racks of blight grenades.[1] 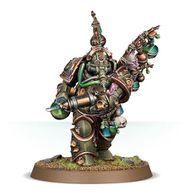