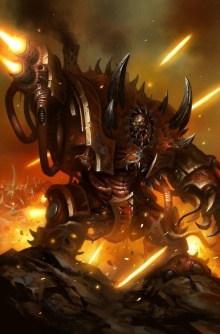 Helbrutes are a kind of Chaos Dreadnought.

These hulking monstrosities are Dreadnoughts whose suits have been hideously corrupted by the powers of Chaos and are now consumed by maddening rage. It is considered a great misfortune to be entombed within a Helbrute, and over time the flesh of the injured body will meld with the metal of the machine it inhabits. This only fuels the maddening rage that Helbrutes display in battle, occasionally attacking their allies as much as the enemy.[1][3]

Most Helbrutes are completely psychotic, even before the Warp melds the metal of their prison with the flesh inside. A creeping insanity, mingled with desperation and fury, eats away at them over the long millennia. Between battles, the sarcophagus containing the pilot is disconnected and dragged clear of its armoured shell to lie inert and seething in the darkness. The Helbrute is chained like a beast when it is not actually fighting, for fear that some residue of the pilot's soul may send it into a berserk rampage. As the ships of a Chaos Space Marine fleet approach their prey, the Helbrute's heavy weapons are prepared and loaded, its power scourges and hammer-like fists are daubed in fresh blood, and its sarcophagus is installed. The madness of the Chaos Space Marine within burns ever fiercer as he rises from his dormancy. Once the fleets warriors have landed, the Helbrute is unleashed, a lunatic beast of flesh and metal intent upon venting its rage on everything in its path.[3]

Helbrutes wield an array of infernal weaponry. It is typical equipped with a Multi-Melta and Power Fist, but much variation exists. Many are seen sporting twin-linked Heavy Bolters, Plasma Cannons, Reaper Autocannons, twin-linked Lascannons, Missile Launchers, Power Scourges, Thunder Hammers, and fists that are equipped with Combi-Bolters and Heavy Flamers.[3a]

Unlike other Legions, the Helbrutes of the Thousand Sons cause exclusively hatred among the surviving Chaos Space Marines of the Legion. The first Helbrutes of the Thousand Sons were created from those Dreadnoughts of the Legion who underwent the largest and worst mutations on the Planet of Sorcerers. However, the Thousand Sons cannot create new Helbrute from their own Legionnaires. Rubric Marines are not suitable for this, as they no longer have the physical and spiritual substance necessary for the revitalization of the Helbrute systems. Therefore, the Thousand Sons are forced to resort to deception. They lure other Legionnaries into their ranks, promising them enormous knowledge and unimaginable power. However, after many trials (each of which is designed to ritually attach their soul to Helbrute's systems), these Legionnaires are flensed and their body reduced with warpflame, turning the Legionnaire's body into a burnt mass of organs, bones and nerve fibers. Then this unfortunate creature, still conscious and fully aware of what is happening to him, is placed in an amniotic sac, which, in turn, is inserted into Helbrute, which immediately activates its systems. The torment of the Legionnaire, gradually losing his mind, nourishes the power of Helbrute, giving him the opportunity to move and fight, as the Legionnaire’s unimaginable hatred is directly connected through the nervous synapses to the cogitation arrays of Helbrute. Thus, Helbrute turns into a crazy machine full of madness and hatred, seeking to destroy the enemies of their Sorcerers masters. Between battles, the amniotic sac with the body of the Legionnaire is removed from Helbrute and hangs in special halls, where, protected by ward, they surrounded by daemons trying to get to them. This further enhances the madness and hatred of the Legionnaire, which with each new battle turns his Helbrute into a more and more destructive machine. Only death can save such a Legionnaire from his endless suffering.[4]