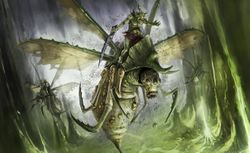 High-ranking Plaguebearers amongst Nurgle's Legions are given the title of Plague Drone, something which conveys commendable humility. These overseers of Nurgle's realm ride into battle upon Rot Flies, talling diseases running rife across the battlefield. Plague Drone squadrons specialize in spreading disease and havoc in the Plague God's name.[1][2] The riders are armed with Plagueswords and Death's Heads while the flies themselves wield Venom Stingers and a Rot Proboscis.[3] 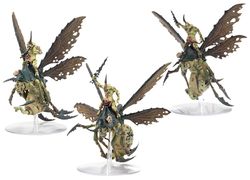 A swarm of Plague Drones[1]