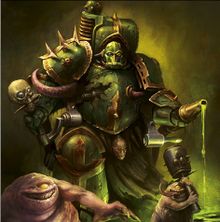 Foul Blightspawns are the elite of Plague Marines which serve within the Death Guard and its affiliates.

Foul Blightspawn rise from the Plague Marine ranks, typically those warriors who feel joy in watching their victims suffer in the grip of Nurgle’s plagues. Cruelty festers in their souls, manifesting itself in ever more grotesque physical degeneration. One of their many mutations sees their eyes dribble from their sockets as black slime, leaving the Blightspawn to ‘see’ in shades of warp energy. Their mouths twist into fanged, puckered spouts, and a wretched stench seeps from their pores, so foul that it causes even Plague Marines to balk. All the while, forbidden secrets of Nurgle’s plaguecraft form in the Blightspawns’ minds, compelling them toward alchemy and the creation of disease.[1]

When such manifestations occur, the new Blightspawn is sent to the disease factories of the Plague Planet. The foul gears and pistons of the machinery are forcibly driven into his guts, and an incubator is sutured to his armor, never to be removed. On the Plague Planet the Foul Blightspawn gather to learn from the eldest and foulest of their number, beings so bloated with corruption that they have taken root amidst the factories. When the Foul Blightspawn rejoin their warbands, they bring their new alchemical lore with them. Inside their incubators are batches of their latest, finest work, ready to be unleashed.[1] 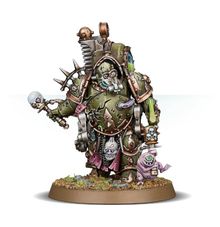