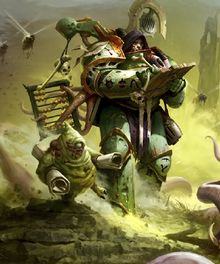 A Tallyman of the Death Guard

The Tallymen are warriors of the Death Guard who serve as the spiritual leaders of the Legion.

Part priests, part demagogues, part metaphysical scribes and quartermasters, these zealots stride to battle festooned with the trappings of their strange craft. Upon their shoulders the Tallymen bear huge vox speakers through which their voices boom. Their incantations are endless, a drone of counting. Tallymen are the preachers of the Sevenfold path, emphasizing the number of Nurgle, seven in all its forms.[1]

But perhaps the most notable feature of the Tallymen are the tomes they carry, filled with the woes inflicted on the enemy and other information relevant to the Plague God. They count spent shells, wounds inflicted, and the number of screams that can be heard. They count the number of flies in the air and the number of slain. Always they tally the unholy seven, and in so doing they invoke Nurgle’s boon. Nurgle’s faithful are empowered and inspired by the Tallyman’s count. On the battlefield, Tallymen are terrors, yet at all other times their order is isolated and secretive. Long ago, Mortarion entrusted them with the numerological codes to unlock the hidden vaults on the Plague Planet where the Death Guard keep their most appalling viral weapons. Such strains are precious and irreplaceable, and not lightly do the Tallymen part with them. The Death Guard Lord who demands access to these horrific instruments of destruction had best be prepared to pay a price to a Tallyman.[1] 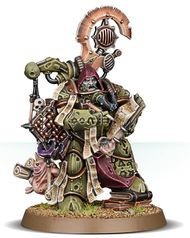