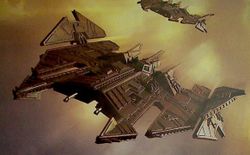 The Harbinger is an enormous, super-heavy bomber employed by the forces of Chaos. Originally considered little more than a rumour, it is now becoming an increasingly common sight in the skies over Chaos battlefields.[1]

Harbinger bombers are normally piloted by four hardwired servitors, but in some cases it can be piloted by one or two cultists or skilled Chaos marines. It can also be daemonically possessed making it into a terrifying daemon engine. Their immense size enables them to carry a massive payload of bombs, from incendiaries and biological munitions to nuclear payloads able to level entire cities, along with numerous turret mounted Autocannons on the underside to strafe ground targets. However this size also leads to poor manoeuvrability, requiring the Harbinger be accompanied by the smaller Hell Blade and Hell Talon fighters.[1]

In addition to all of this It can be outfitted with exotic Warp Rift technology which is an offense to nature itself that results in the sky blackening and causing violent storms that give enemy aircraft turbulence and the likelihood of getting shot down by Warp lightning.[1]